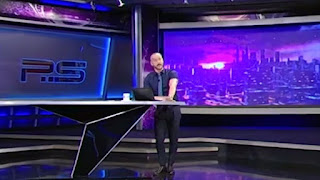 He raised a statement to the TV host Jorge used the obscene words against Russian President Vladimir Putin and his parents departed, a wave of condemnations among officials and public opinion in Georgia.
Rushed a lot of Georgian citizens to the expression on social networking sites dissatisfaction after the broadcast channel "Rustavi 2" on Sunday evening, a program presented by the media and Georgi Gabonaa initiated by the launch of Almspat and insults in Russian President Vladimir Putin and his parents departed, using the ugliest words.

With nightfall, a crowd of citizens gathered in front of the channel's headquarters in protest, denouncing the effectiveness of declaring the ominous and demanding an apology channel, forcing management to shut down and stop broadcasting until Monday morning "in order to preserve the safety of its employees" after some were assaulted by protesters.

She was the President of Georgia Salome Zourabichvili for "absolute condemnation of hate speech, aggression and verbal insults and provocative statements issued today on the channel" Rustavi 2 ", noting that" contrary to all the Georgian tradition, and hurt only deepen the division and the escalation of tension within the country, and with Russia and Region". 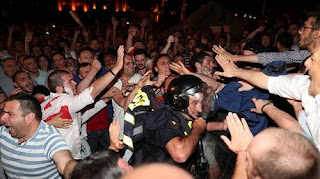 For his part, Prime Minister Mamuka Bouktadze described what introduced "Rustavi 2" as "a very serious message directed against peace and security in Georgia," and "disgusting act of provocation and an attempt to destabilize our country, which is totally unacceptable," and expressed the hope that the distance all the citizens of Georgia and its friends themselves from this perilous adventure trend. "

The management of the channel, he has disowned Gabonaa's remarks, noting that they were not aware of his intentions, and confirmed the director of the channel that "the expression of opinion in this form is totally unacceptable and not consistent with the editorial channel or professional requirements of standards", but he refused to apologize for insulting Putin , expressing solidarity with the significance of the words Gabonaa.

It should be noted that the channel "Rustavi 2" calculated on the former President Mikhail Saakashvili, who is considered a key faction of his party in the Georgian opposition.