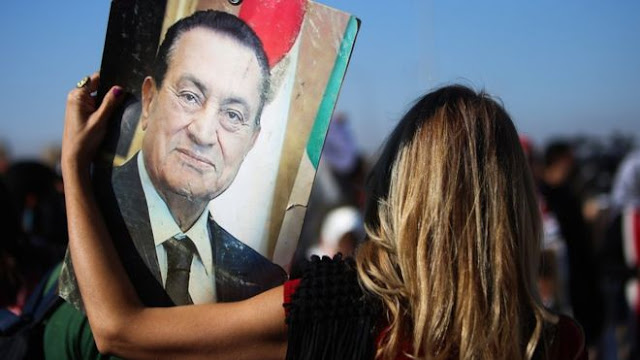 The Supreme State Security Prosecution in Egypt has decided to imprison Karim Hussein, director of the "I'm sorry, Rees" page on Facebook, which supports former Egyptian President Hosni Mubarak for 15 days on charges of publishing false news and misuse of social networking sites.

Among the charges against Hussein is also joining a group that was established against the law, without naming the group. Hussein was arrested from his home last Monday by six plainclothes security personnel who confiscated his mobile phone and personal computer. The "I'm sorry, Reiss" page was founded in February 2011, after Mubarak stepped down and is followed by more than three million people. The "I am sorry to see" page displays news and pictures, clips of the former president and members of his family, while in power and after his departure.

Hussein has published pictures of him with Mubarak on the page, which has recently compared the economic and political situation in Egypt now with the era of Mubarak. The page recently featured televised footage of Mubarak during his term in which he spoke of the importance of his government's continued support for commodities and fuel, in line with the current policy to liberalize fuel prices by the Egyptian government. Karim Hussein visited Mubarak more than once in the hospital and home, and his son Gamal Mubarak attended Hussein's wedding two years ago.

Hussein was a protagonist on his page to demonstrate on June 30, 2013, against the rule of former President Mohamed Morsi of the Muslim Brotherhood. Over the past two years, Egyptian security forces have arrested political opponents, bloggers and journalists on charges of their activities on social networks, "joining a terrorist group" or "spreading false news." According to the law regulating the press and media in Egypt, anyone who runs a personal page on social media sites with more than 5000 users is treated as media and the penalties included in it apply, some of which amount to imprisonment and fines if false news is published that affects national security. The social media in Egypt are widespread, far surpassing websites and print newspapers.

"We are not a suspicious group"

"We are not a suspicious group, not against the country," Assem Abu-al-Khayr, one of the directors and founders of the "I'm sorry, Reiss" page along with Hussein, said on his Facebook page in a tweet after Hussein's decision. We provide it or get excited, but our age was not the birth of Egypt. " The "I'm sorry to reiss" page issued a statement, following the arrest of its director, in which it said that it declares "its full confidence in the national security authorities, and treated wisely in such matters." Alaa, Mubarak's son, denied reports published by social networking pages and websites that Karim Hussein is the director of Alaa's Twitter page. "I do not comment on the decision to detain Hussein for 15 days, but in her last comment on his arrest, she stressed that she is" always and always with the Egyptian state, with all its institutions and leadership, and this position will never change. "

Amnesty International said in a report earlier this year that "the crackdown on freedom of expression in Egypt has reached levels of concern and unprecedented in the modern history of Egypt," which the Egyptian government denies on a permanent basis and says its judicial system is independent, "Politicized". The Egyptian government has approved a number of laws and legislations, which rights activists say limit freedom on the Internet, in an unprecedented manner, most notably the Cybercrime Act. However, the Egyptian authorities responded to critics of these laws, that it aims to secure the personal accounts of citizens, and impose penalties for exposure to their data.
at July 11, 2019