A new "scandal" has emerged on the Iranian scene, confirming Iran's violations of international resolutions, especially the sanctions imposed on it. 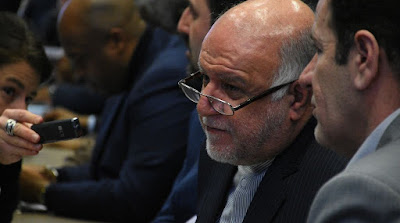 A new "scandal" has emerged on the Iranian scene, confirming Iran's violations of international resolutions, especially the sanctions imposed on it. More recently, Iranian state television has revealed what Iran is doing in order to circumvent US sanctions. In detail, state television broadcast a report on a ship that was able to reach China and deliver an oil shipment, in clear circumvention of US sanctions. The television showed a series of satellite images, in a program directly showed the details of the tanker of the Iranian Oil Ministry docked in a port in China, and delivery of the shipment of oil. Also, television showed the path taken by the Iranian oil tanker "Sarina" at sea, until it reached a port in China and laid it there. This "scam" that proves Iran's violations has been confirmed by Iran's Oil Minister Begin Zanganeh, which is a bigger scandal. Zanganeh's assertion comes as part of an attack on Iranian television because he exposed the "hidden", and considered that "the step of television lost all the efforts of the country to be able to circumvent the sanctions." According to the news agencyundefined "Zanganeh pointed out that some foreign media are hostile to Iran and are republishing this issue, it is illegal." The report received discontent from social media outlets, and a number of activists considered it "revealing confidential information to circumvent sanctions". undefined

"The information provided is not new, and satellite imagery has been published earlier in the Financial Times, in more detail," IRNA said in a statement. "Two million barrels of Iranian oil in Malaysia have been transferred to a Chinese tanker and headed to China," a recent report told Reuters. Reuters estimated Iran's production of crude oil at 300,000 barrels or less last month, but it is not clear to which country shipments were exported. Prior to the comprehensive ban on Iran's oil exports last November, and then the temporary waivers in May, Iran exported about 2.5 million bpd. US sanctions have had a clear and significant impact on Iran's dilapidated economy, leading to disagreements between the wings of the regime and within the government. Zanganeh said earlier that "the current situation is more difficult than the situation of the war on Iraq," asserting that "the Americans imposed the most severe sanctions organized in history against Iran."