Syria and Turkey share the bombing sites .. And «Putin» calls to eliminate the hotbeds of tension

The Turkish Defense Ministry announced the bombing of sites belonging to the Syrian army, in response to what the Anatolia agency called the «aggression» on the observation point in Idlib, while the Syrian army said it was a response to the source of the Turkish missiles. 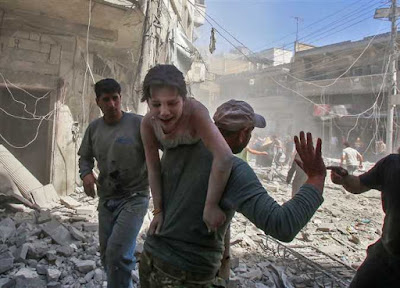 The Turkish Defense Ministry announced yesterday that one Turkish soldier was killed and three others injured in an attack on a Turkish observation post in the Idlib area to reduce the escalation in northwestern Syria, accusing the Syrian authorities of being behind the incident.

The Turkish Defense Ministry said in a statement that the Syrian forces stationed near the area of reducing the escalation targeted the tenth observation point located in the corner of southern countryside Idlib artillery shells, considering this attack deliberately.

According to the Turkish defense, "the Russian military attache in Ankara was summoned to the Chief of General Staff to take necessary action with Russia on this incident." The Turkish Defense Ministry also pledged to respond to the attack "as intensely as possible."

Turkey has already deployed 12 monitoring points in the area, following up on the implementation of the cease-fire in the region, which is currently experiencing tension between the Syrian government forces and the armed organizations that control Idlib, especially the "Sham Liberation Organization", which is considered a terrorist organization and is protected by Turkey .

Syrian television reported that units of the army responded yesterday to the source of the Turkish troops' shells targeting army positions in the north of the country. Syrian television reported that more than 18 rocket-propelled grenades from Turkish forces in the southern region of Sher Maghawar and the southern town of Idlib targeted the forces of al-Kahram, Silver Tomb and the outskirts of the town of Al-Hawiz in the jungle in the northern Hama countryside, and the army responded to its source.

The Syrian news agency SANA said that in response to the ongoing attacks on the villages and towns of Hama, the Syrian army launched heavy missile strikes on the sites of the spread of terrorist organizations on the outskirts of the villages of Al-Jabin Tal Malh and Al-Tamana Zakat in the northern suburb of Hama, where the dead and equipment losses.
at July 06, 2019