US-Iranian tension: Do you kill Washington, "the hen that lays golden eggs?" 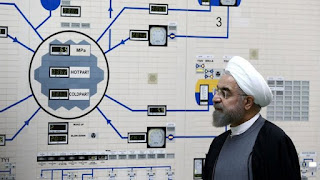 Discussed Arab newspapers, in both paper and electronic, the threat of Iranian President Hassan Rowhani to increase his country's uranium enrichment ratio above the allowed rate.

Rowhani stressed that Tehran would increase its stockpile of enriched uranium starting on Sunday July 7 if they are not easing economic sanctions imposed by the United States of America.

Sunday "will be different days."
Abdel-Bari Atwan says in the opinion of the day of London that "Iran has the ability and experience to produce a nuclear bomb within a year. The world now stands on the brink of military confrontation between Iran and the United States, which will increase prospects after on Sunday, European states will not be able to meet the Iranian conditions easing economic sanctions before the end of the deadline, we do not believe that the Iranian authorities will drop these threats only if a miracle occurred. "

He adds Atwan "Israeli horror of the size of the Iranian retaliation that led to the decline in Trump about his plan a military attack on Iran, targeting three missile and nuclear sites in retaliation for the spy plane dropped the march, and ten minutes before the start of the aircraft to perform the task."

The writer emphasizes that "on Sunday will be different days in all cases, in view of the possible situations that may be taken by several key parties in the crisis, such as the Europeans and the Americans and Israelis, as well as the Iranians, the wedding owners, of course, and it would be easy to know the white thread of black for us and others observers. "

And stresses the Lebanese news in an editorial that Tehran "stick to its path escalation within the framework of the nuclear agreement file. Path will enter the Lausanne agreement in a dark tunnel, it seems the possibility of returning him to life is difficult, though the legal path for such a scenario requires a long time until the formal announcement of the break up contract agreement ".

Adds news: "For Tehran, the agreement, politically and economically, is almost dead by US sanctions, or rather the European commitment to these sanctions. After a year of US withdrawal, and the escalation of the confrontation between Tehran and Washington, do not find Iran to agree only a paper aimed at out within a basket of anti-US policy of extreme pressure pressures, since they no longer have to lose or gain, unless these pressures succeeded in changing the European position. "

"Pamper" Europe and the Trump Tehran 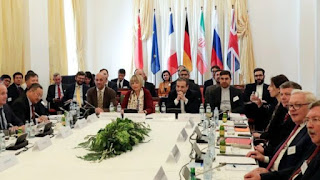 A number of commentators also drew criticism arrows to the way in which the US President Donald Trump and European countries with Iran.

In the opinion of Kuwait, Mubarak compares more Moasherji between the way of former US President John F. Kennedy's deal with the Russian missile crisis in Cuba and the Trump deal with Tehran.

Says Moasherji "If we heard Trump threats these days launched by then withdrawn and asks the dialogue with Iran, while Iran is more of a threat to neighboring countries, and move their arms in the Gulf region to launch attacks on US interests, even they returned to uranium enrichment and abandoned nuclear deal It concluded with Western countries, because we knew the difference between Kennedy and Trump. "

In an article titled "America will not kill the hen lays golden eggs," Talal Abdul Karim says the Kuwaiti Al-Qabas "Washington does not rush to the rescue of one, it does not adopt a policy to eliminate the threats, but to exploit, as threats of Iran to the Gulf states, how spends Trump on the Iranian regime, He and his predecessors, presidents consider him Caldjajh that lays them gold? ".

He adds Karim "Iran is threatening the Arabs, and the Arabs pay for its threats of gold to America, and Iran is not what the Arabs were forced to waste their money to guard against evil."

In Bahrain's Al Watan, Walid Sabri wrote an article titled "Why Europe gasping behind Iran's terrorist," it says that "Europe Pamper Iran" was behind Tehran's threat to increase uranium enrichment.

He adds Sabri "and Europe met with the Iranian threat to go beyond the stock of low-enriched uranium to express deep regret and concern to Tehran's decision ... without taking a firm attitude towards the actions and behavior of Iran."

He adds Sabri "revealed the behavior of European countries in dealing with the Iranian terrorism duality and weakness, but amounted to a panting behind the system of clerical rule, especially with European officials declaration that they will maintain their support for Iran's nuclear agreement and will continue to trade with Iran despite the pressure from Trump."

The writer asserts that it "makes no sense to pamper Europe 'Iran terrorist' and the arrival of the relationship to the stage of the old continent panting behind the system of clerical rule by insisting on continuing weak nuclear deal ignores fundamental issues, most notably support for extremism and human rights."