Who is the girl Princess Haya Al Hussein, wife of the ruler of Dubai "is hidden in London"?

Several days ago speaking media world for many "escape wife and Ruler of Dubai Mohammed bin Rashid Al Maktoum," and request accommodation in a European country and filed a suit for divorce from the UAE Sheikh.

According to The Daily American Beast, Princess Haya made a request for asylum in Germany and has been approved in principle, as the site itself explained that it is currently staying with her two children, the venerable 11 years old, and Zayed 7 years, in a secret location in the British capital London, where he prefers to live there.

It was striking that were not come along with her husband Mohammed bin Rashid (69 years) during the Ascot horse race in Britain last month, a harder occasion to appear where together. 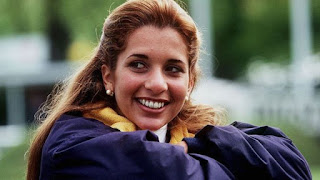 According to media sources said Sheikh Mohammed bin Rashid, Crown Prince of Abu Dhabi and the actual ruler of the UAE Mohammed bin Zayed traveled to Germany before the opening of the Royal Ascot race in an effort to persuade Haya to return to the UAE, but their efforts were unsuccessful and did not convince the German authorities to return them.

According to multiple news sources, a German diplomat in the United Arab Emirates Princess Haya helped to escape from Dubai.
Any chance of reconciliation between the two parties has vanished as evidenced by the poem Mohammed bin Rashid feeling full of anger and bitterness, which was published and was circulated widely through the means of social communication.

The Mohammed bin Rashid married six times and has 23 sons and daughters
Loss of mother
Of Princess Haya 45 years old and studied in Britain in private schools and then enrolled at the University of Oxford's prestigious, which is a stronghold of preparing politicians future in Britain and abroad, a sister of the current Jordanian King Abdullah Bin Al Hussein, the father hand, while her mother, it is Queen Alia, who died in an accident helicopter crash in 1977. 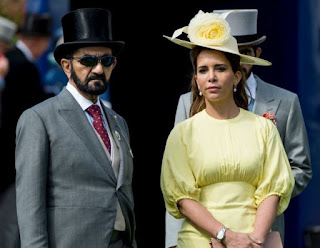 Haya focused on equestrian from an early stage of her life in the wake of the death of her mother. She said in an interview with CNN that the United States in 2014 it was dubbed Balmottagoukah because of Antoaiatha and grief over the loss of her mother, Vohdaha her father, King Hussein, a small horse when she was six years old and asked her sponsorship Vtkhalst from its isolation and is concerned since that time horses.

In 1992, he participated in the seventh Arab Games in Damascus course and won the Bronze Award, and represented Jordan at the Sydney Olympics in 2000 and two years later represented her country in jumping at the International Equestrian Championships held in Spain's competition.

Married Haya Mohammed bin Rashid in 2004 and gave birth to two children, and assumed the presidency of the International Equestrian Federation for 8 years until he resigned from it in 2014.

Dubai Equestrian Club also presided in the UAE for some time.

It was announced via a video clip on its front page on Instagram in the month of January last return for the sport of horse riding.